An open source blockchain based Smart Bill of Exchange 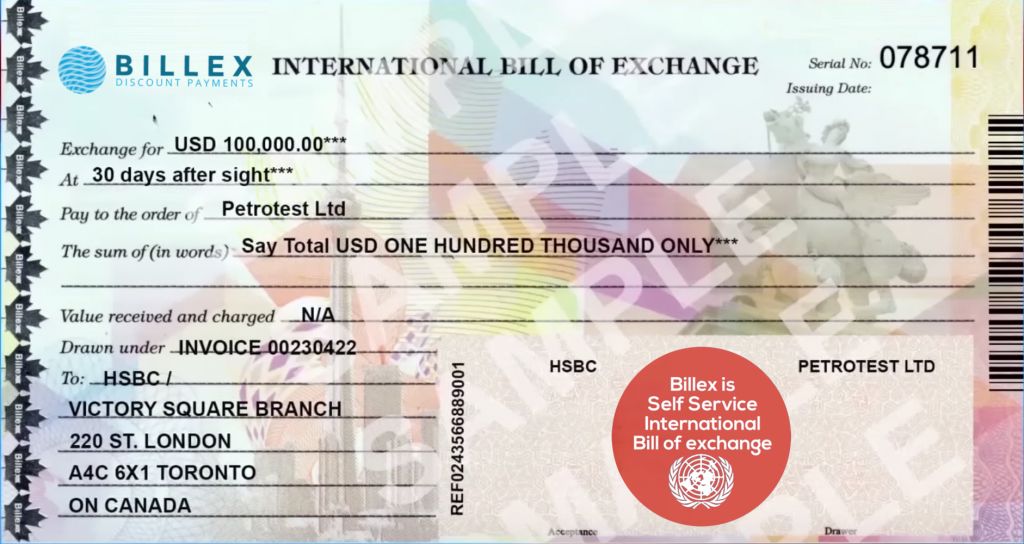 Bill of Exchange (BILLEX) is a document guaranteeing the payment of a specific amount of money, either on demand, or at a set time, with the payer named on the document.

Negotiable financial instruments like Bills of Exchange (Drafts) and Cheques have been around as early as the 8th century and are still a key supporting pillar for trade throughout the world. Until recently, most of these instruments were paper-based, physically exchanged, and endorsed to transfer value, leaving ample room for inefficiencies and fraud. People creating duplicates or forging signatures on a bill of exchange and then discounting it, is not unheard of. Banks have tried to address these issues using systems and processes but they are still prevalent.

With time, Negotiable instruments have moved to digital platforms which are often created by banks for their customers. Such centralized solutions have two main issues. First, they are not able to create a network which is required to provide universal acceptability these instruments lose their benefit if they are not transferable or have restricted acceptance. Second problem is that it creates single points of trust, control and failure which is far from ideal. Financial institutions and customers realized that there were limitations with the centralized digitization model. As a result, many banks don’t issue digital cheques or BoE and endorsements / settlements are still done using lengthy, risky processes.

Recent developments in Blockchain present a unique combination of key technologies to address the issues highlighted above. With decentralized, distributed, and immutable data management, Blockchain technology in banking can provide an ideal platform for issuance, endorsement, and settlement of negotiable instruments. This can be achieved with or without a traditional financial intermediary.

Reimagining Negotiable Instruments with Blockchain technology and Bill of Exchange

Bill of exchange, which is also known as draft, is a financial document commonly used in international trade transactions.

According to UK’s Bill of Exchange Act (1882), the bill of exchange is defined as an “unconditional order in writing, addressed by one person to another, signed by the person giving it (drawer), requiring the person to whom it is addressed (drawee) to pay on demand or at a fixed or determinable future time a sum certain in money to or to the order of a specified person (payee), or to bearer”.

Parties to a Bill of Exchange:

As an example let’s see the current lifecycle of a bill of exchange:

Now imagine the same process with a Blockchain-based platform called BILLEX which provides facility to manage the whole lifecycle in a secure, digital way:

1. Billex smart contract will be able to issue digital cheques to their participants on the Blockchain platform. The digital bill of exchange (Billex) will have a record of issuing smart contract and the current owner.

2. Issuer of Billex can fill in details like the payee’s public key, amount, and date on the digital check and then sign that with their private key.

3. A signed Billex will be digitally transferred to the payee, i.e. the payee will be able to see that check under their ownership.

4. Smart contract can be utilized here to present the payee’s Billex to itself (smart contract) automatically.

5. Instead of utilizing a centralized clearing house, the settlement can be enabled by smart contract that checks the available balance in payer’s account and then initiates a fund transfer to payee’s account.

6. All settlements can be managed by smart contracts and can be done on a net or gross basis.

A bill of exchange is transferable, so the drawee may find themself paying an entirely different party than it initially agreed to pay. The payee can transfer the bill to another party by endorsing the back of the document.

A payee may sell a bill of exchange to another party for a discounted price in order to obtain funds prior to the payment date specified on the bill. The discount represents the interest cost associated with being paid early.

A bill of exchange does not usually include a requirement to pay interest. If interest is to be paid, then the percentage interest rate is stated on the document. If a bill does not pay interest, then it is effectively a post-dated check.

Currently a lot of time, effort, and cost goes into ensuring that the cheque is genuine, signatures are matching, and that there is enough balance in the account. All of this can be automated using smart contracts and made more secure while reducing the risks associated with current processes. Blockchain provides a clear advantage in such cases where there is handover of assets, authentication at various stages, chances of forgery, reconciliations etc. and assigns clear ownership of any asset, a bill of exchange in this case.

The ideas presented above are incremental in nature, building around what happens today. If Blockchain continues to mature as everyone is expecting, it has the potential to change the core of all interactions whether its B2B, B2C or C2C.

Don’t miss out, Be the first to know

Get notified about the details of BILLEX, as well as other important development update.